What a massive announcement last night! With over 30 more act announced for Download 2016. It's set to get interesting and as always will be the talk of the next few months while we wait for more acts to come! And perhaps more headliners announced too! 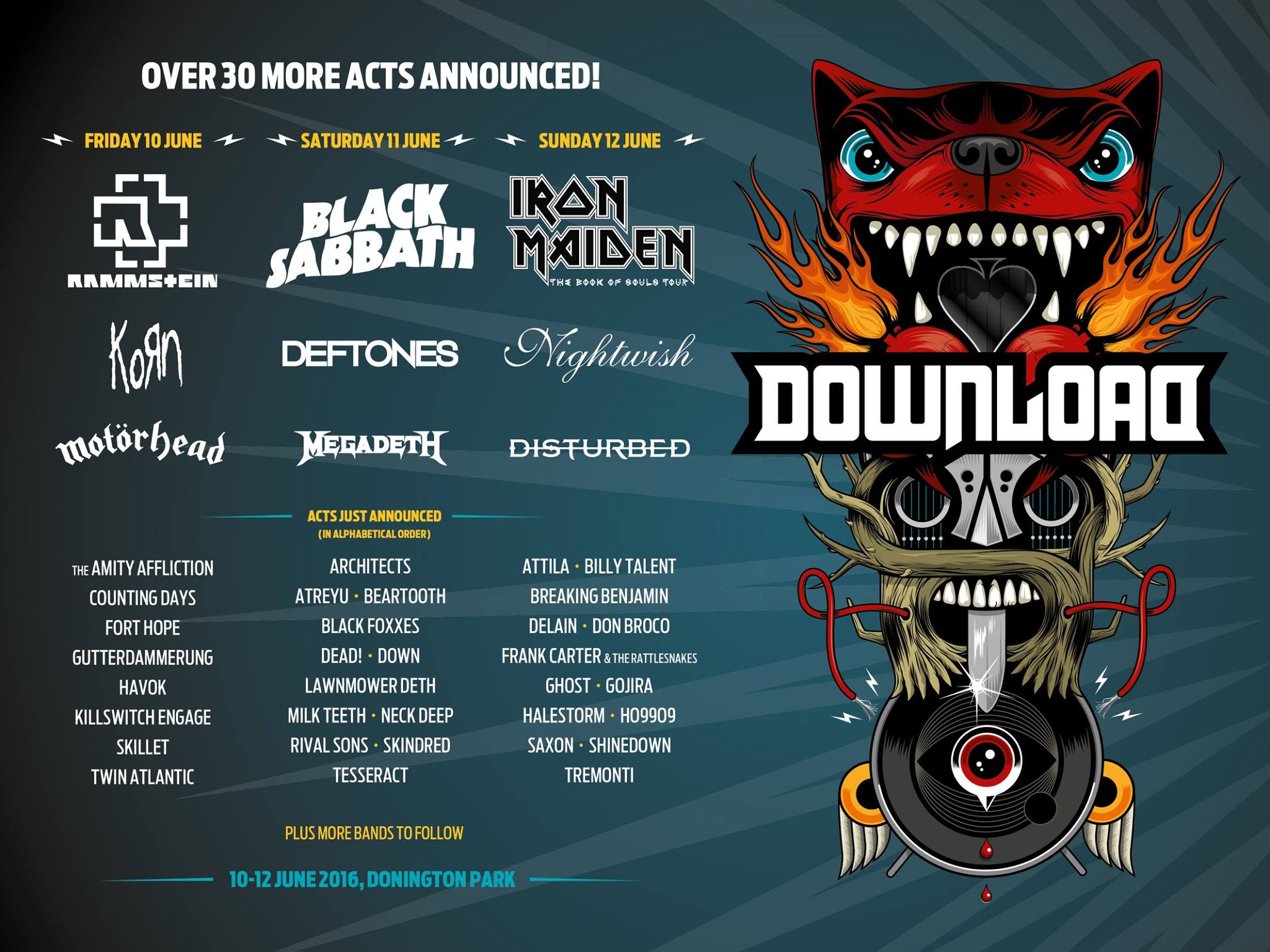 Rodney Matthews one of the finest Science Fantasy artists ever has released a new Special Edition Christmas Card with a CD of I saw Three Ships.

Rodney Matthews has worked as a freelance designer and illustrator of fantasy, science fiction and fairy tale as applied to record covers, book jackets and books (adult and children's), TV series, and video games for 30 years, and is acknowledged world-wide as being one of the top practitioners in these genres.

His originals have been exhibited at Britain's foremost illustrators gallery, the Chris Beetles Gallery in London's West End, while he has held one-man shows at the Langton Gallery, London, in Sierre, Switzerland, and in Cardiff and Machynlleth, Wales, with participation in many joint shows and signing sessions in the UK and Europe. Matthews' originals are owned by celebrities including Pythons John Cleese and Terry Jones, who have 5 between them. Rodney has been in great demand for record cover design, having done more than 70 for artists including Thin Lizzy, Nazareth, Asia, The Scorpions, Barclay James Harvest, Magnum (10), and Rick Wakeman.

CHRISTMAS SINGLE – “I SAW THREE SHIPS”
(Single track CD with exclusive Christmas card featuring artwork by Rodney Matthews)
Released for public sale, 6 November 2015, this is a real treat for both Rodney Matthews fans and rock fans alike. Unknown to many, fantasy artist Matthews, famous for his iconic album covers for rock artists including Asia, Magnum, Nazareth, Praying Mantis and Rick Wakeman, is also a talented drummer. On this festive track he indulges us with his drum skills, where he plays alongside Jeff Scheetz on guitar, Asia’s John Payne on bass, former Yes star Oliver Wakeman on keyboards, Magnum’s Bob Catley on vocals and Pete Coleman on the bagpipes and recorder – a host of great musicians take on a classic Christmas Carol and totally rock it!
Each CD purchase comes with a Christmas card featuring Matthews’ stunning artwork spanning front and back. It is an ideal gift to send to someone special this Christmas … or maybe just to keep for yourself! Matthews is also offering the option of personally hand-signing the cards. The package is available to purchase online now: worldwide at Etsy, as well as throughout Europe and the US on Amazon.
This Christmas track is a forerunner to a “Prog-ish” styled album, currently under development by the above musicians. More names to follow. Anticipated album release date is sometime in 2016.

Leeds & Reading Festival 2016! And They're Off. First Band Announcements.

Reading & Leeds Festivals are excited to announce RED HOT CHILI PEPPERS as the first headliners for 2016. Taking to the main stage for what promises to be a phenomenal headline set as a FESTIVAL EXCLUSIVE, Red Hot Chili Peppers are; Anthony Kiedis, Flea, Chad Smith and Josh Klinghoffer. Back on the UK music scene with their 11th studio album on the way, and returning to Reading and Leeds Festival nine years after their last performance, it’s fair to say their live return is much anticipated. When the band were asked which UK Festival they would like to play next summer, Chad Smith commented “the simultaneous answer was ‘Reading and Leeds’”

The 1975 will be making a huge appearance at next year’s festival following the release of their highly anticipated second album. With a gargantuan new stage set up and a fiercely dedicated fan base, their appearance is going to be undeniably special.

Mancunian festival favourites Courteeners will also be returning in majestic fashion in 2016, following the release of ‘Concrete Love’ and a huge show in Heaton Park earlier this summer, priming them for a massive performance.

With a famously visceral live show, Twenty One Pilots appearance at Reading & Leeds 2016 looks set to be nothing short of mind blowing, especially in the wake of their November sold-out UK tour and their recent album Blurryface, which topped the Billboard Charts. 2015 has been a huge year for the guys and with another sold out tour under their belts in February and two nights at Madison Square Garden in the summer, 2016 is set to be another incredible year for this band and their performance at Reading & Leeds will definitely cement them as the most exciting band around right now.

The latest announcements from Bloodstock 2016!

As the calendar turns to the final month of the year, BLOODSTOCK are excited to announce their Sunday night headliner for 2016! The very mighty SLAYER are set to close out the festival at Catton Park next August.

Having recently released their twelfth studio album, ‘Repentless’, which has been their most successful to date, SLAYER are on truly blistering form! Check out their brutal, yet epic video for ‘Repentless’, starring Machete star Danny Trejo: https://youtu.be/yjb0j9l1sz4.

Legendary SLAYER axeman, Kerry King comments; "I’m looking forward to heading back to Bloodstock, as always! Come party with SLAYER and watch us wreck the place!!"

That is one hell of an opening announcement for the 10th Anniversay of Slam Dunk Festival! It's going to be an exceptional weekend at whichever venue you choose to go to! Perhaps even all three.

Check out more details on SlamDunk 2016.


After the huge success of Winter Rocks festival 2014, the rock all day event returns on Saturday the 5th December with an even bigger line up of international and rising artists.

Keeping to its Sheffield roots, the event will take place at The Corporation: an award winning music nightclub that has been established for over 20 years in the heart of the city.

Headlining the main stage will be British rock & blues band THE TEMPERANCE MOVEMENT. After receiving critical acclaim that as seen them tour worldwide including supporting The Rolling Stones, incredible album sales of their 2013 debut and just poised to release their new album ‘White Bear’ on 15th January 2016, this is guaranteed to be a show to remember from one of the UK’s hottest bands.


" We are looking forward to tearing it upalong with the fantastic line up at Winter Rocks Festival at The Corporation on 5th Decemeber. Let's carve the date in Sheffields immense rock heritage.....it's gonna be an awesome way to round out a brilliant year." - The Temperance Movement

American hard rockers FOZZY (featuring WWE’s wrestling superstar Chirs Jericho on vocals) will be main support.  Now with 7 studio albums under their belts and an ever growing fan base they will be one of the ones to watch on the day: Here’s what Chris Jericho had to say about the event:

"Let me ask you this Fozzy fanatics...what's the best way for us to end off yet another crackin Fozzy UK tour and kick off the holiday season? How about starting a war with hundreds of our closest friends (onstage and off) in Sheffield at Winter Rocks?? Sounds GREAT to me!! Father Christmas has already text me for comp tix and I told him to fuck off and get in line with everybody else...YU guys get the presents this year at WINTER ROCKS!! See you there for a Merry ChristJerichomass!"

After recently revealing TWISTED SISTER’s final UK show and the mighty MASTODON as two of their three main stage headliners for 2016, BLOODSTOCK is excited to announce three more main stage bands for next year’s event.

Power metal fans rejoice! Be sure to practice your air guitar skills in advance, because the shredtastic DRAGONFORCE have confirmed that BLOODSTOCK will their only UK show in 2016! Guitarist Herman Li informs us; "It’s been over 10 years since DragonForce played Bloodstock, and both of us have come a long way in that time. Back then, we were a new band with only our debut album out, and Bloodstock was a smaller indoor festival, but still a magnet for true, die-hard rock & metal fans, just as it is today. We had some of our best times that year at Bloodstock and felt great excitement at being invited to play. That excitement is just as real today having been invited back again, only this time it's even better because I won't need to pack the gear and drive up there in my car with Sam Totman as my map reader!!"

British doom pioneers, PARADISE LOST also join the bill for their only UK show of 2016. Guitarist Greg Mackintosh comments “It is great to be confirmed to play Bloodstock 2016! We haven't played there since 2012 and we had a blast. It will also be our first UK festival appearance since the release of our new album, ‘The Plague Within’. We look forward to seeing you all there and adding the doom and gloom to Bloodstock 2016.”

Greek extreme metallers, ROTTING CHRIST will also blaze into Catton Park for their only UK show of 2016. Frontman Sakis comments; “We’re very proud to be coming back to the biggest metal festival in the United Kingdom! Bloodstock, let's create hell on earth next year! Until then...keep the spirit alive!”

Early bird weekend tickets with camping are available now, priced £120 (+ booking fee) from http://bloodstock.seetickets.com/event/bloodstock-2016/catton-park/902838. BLOODSTOCK is family-friendly and welcomes rockers of all ages! A weekend ticket with camping for kids aged 4 - 11 is just £35 (+booking fee) and if your little mosher is under 4, they can join you for free (Note: all children must be accompanied by a parent/guardian over the age of 18)! Campervan pitches are already on sale and these move very quickly, so pick yours up ASAP to avoid disappointment.

So there you have it. The headliners announced for Download 2016 and there'll be discussions galore right upto the day of who should, who shouldn't and why not headline this illustrious festival. Needless to say the deed has been done!

Rammstein will be joined by Saturday night headliners Black Sabbath and Iron Maiden will close out the Sunday night with there only UK performance in 2016 of Download 2016.
For tickets and more details click here!

Bloodstock 2016 Line-up is hotting up!

Hot on the heels of their MASTODON announcement last weekend, BLOODSTOCK are thrilled to confirm that their Friday night headliner will be TWISTED SISTER.

Not only that, this will be the only UK show on the band's ‘Farewell 1976 – 2016’ tour, so your last chance to catch the band live in the UK, as they are set to call it a day after the untimely passing of their drummer AJ Pero earlier this year.

Guitarist Jay Jay French comments: “Our journey in the UK that began in Wrexham in 1982, ends with Bloodstock 2016! Without the recognition that we received from our UK fans, the world would never have known nor would we ever have reached our 40 year milestone!”

BLOODSTOCK’s early bird weekend tickets with camping are on sale now, priced £120 (plus booking fee) from www.bloodstock.uk.com. BLOODSTOCK welcomes rockers of all ages! A weekend ticket with camping for kids (age 4-11) is just £35 (+booking fee), and if your little mosher is under 4, they can join you for free (Note: all children must be accompanied by a parent/guardian over 18). Campervan pitches are also already on sale and these move very quickly, so pick yours up ASAP to avoid disappointment.