THEIR EXCLUSIVE UK FESTIVAL PERFORMANCE OF 2020

WILL BE JOINED BY...

+ MANY MORE ACTS TO BE ANNOUNCED

Set to return after the festival’s biggest year yet, Slam Dunk Festival have announced the first wave of bands for 2020, welcoming UK rock titans Don Broco as the first headliner revealed for next year’s highly anticipated alternative instalment.

With an incomparable charismatic mix of 80s pop inflections and the hardest-hitting riffs on daytime radio, Don Broco’s powerful party-starting tunes have taken the Bedfordian four-piece to astronomical heights. No strangers to Slam Dunk Festival, Don Broco have delivered colossal anthems from their compelling catalogue: ‘Priorities’, ‘Automatic’ and ‘Technology’ in constant career-defining appearances. Enjoying sold-out shows on their UK arena run following the release of their first 2019 track ‘Half Man Half God’, Don Broco continued to unleash their high-octane performances on their most recent run of shows in Asia before surprising fans with dynamic single ‘Action’. Currently powering across the US on their first-ever North American headline tour, Don Broco’s upcoming headline performance at Slam Dunk, set to be their exclusive festival appearance of 2020, will be one of the most anticipated live dates in the next year.

On their headline performance, Don Broco say;
“We bloody love Slam Dunk so it’s a massive honour to be asked to headline next year! Right from our early EP days we’ve always had the best time at Slammy D. It was our first proper festival booking way back when and since we’ve played slots throughout the years on pretty much all the stages, most recently a very surreal performance for us the year before last playing to sea of Rob face masks on the main stage. With this being our first ever festival headline we will certainly be making it a show to remember.”

Slam Dunk Festival Director, Ben Ray says;
“2019 was a big year for us, with the festival moving to fully outdoor sites. It was a massive success so I’m pleased that we are returning to them. Don Broco headlining is pretty special for me as they are the definition of a homegrown band! They first played in 2011 on the new bands stage and have risen through the ranks to the top of the bill!”

Mayday Parade’s Alex Garcia says:
“We’re extremely excited to be coming to England for Slam Dunk Festival. It’s been too long since we’ve played it and it’s definitely one of the most fun festivals to be a part of from the crowd’s energy to the after parties. Not to mention we love touring the UK! ”

Four Year Strong’s Joe Weiss says:
"The UK has always been one of our favourite places to play and we can’t wait to come back to Slam Dunk Festival"

“Can’t wait to get to Slam Dunk again this year. We were able to do it once before and I love that it’s carved out it’s own place as a punk rock institution in a country that’s pretty crowded with festivals”

Teasing the Slam Dunk’s heavier side and poised to deliver the performance of the summer at Leeds and Hatfield are Fearless favourites Ice Nine Kills, metalcore master crafters Issues and Australian alt-rockers House Like Houses.

Spencer Charnas of Ice Nine Kills says:
“After this current sold-out headlining tour of the UK, I can’t think of a better way to return next year than on Slam Dunk....”

Issues says:
"It's so exciting to be back at Slam Dunk! We're going all in!"

In a monumental move, last year saw Slam Dunk operate as a fully green field festival, shifting away from its urban beginnings as Slam Dunk North made its debut at Leeds Temple Newsam site, joining Slam Dunk South in a park location as it enjoyed its second year at Hatfield Park. Celebrating ten years since the first Slam Dunk South date, 2020’s May Bank Holiday weekend is the only place to catch the world’s very best alternative music.

Prices range from £59 for a limited number of early bird tickets up to VIP tickets at £99. 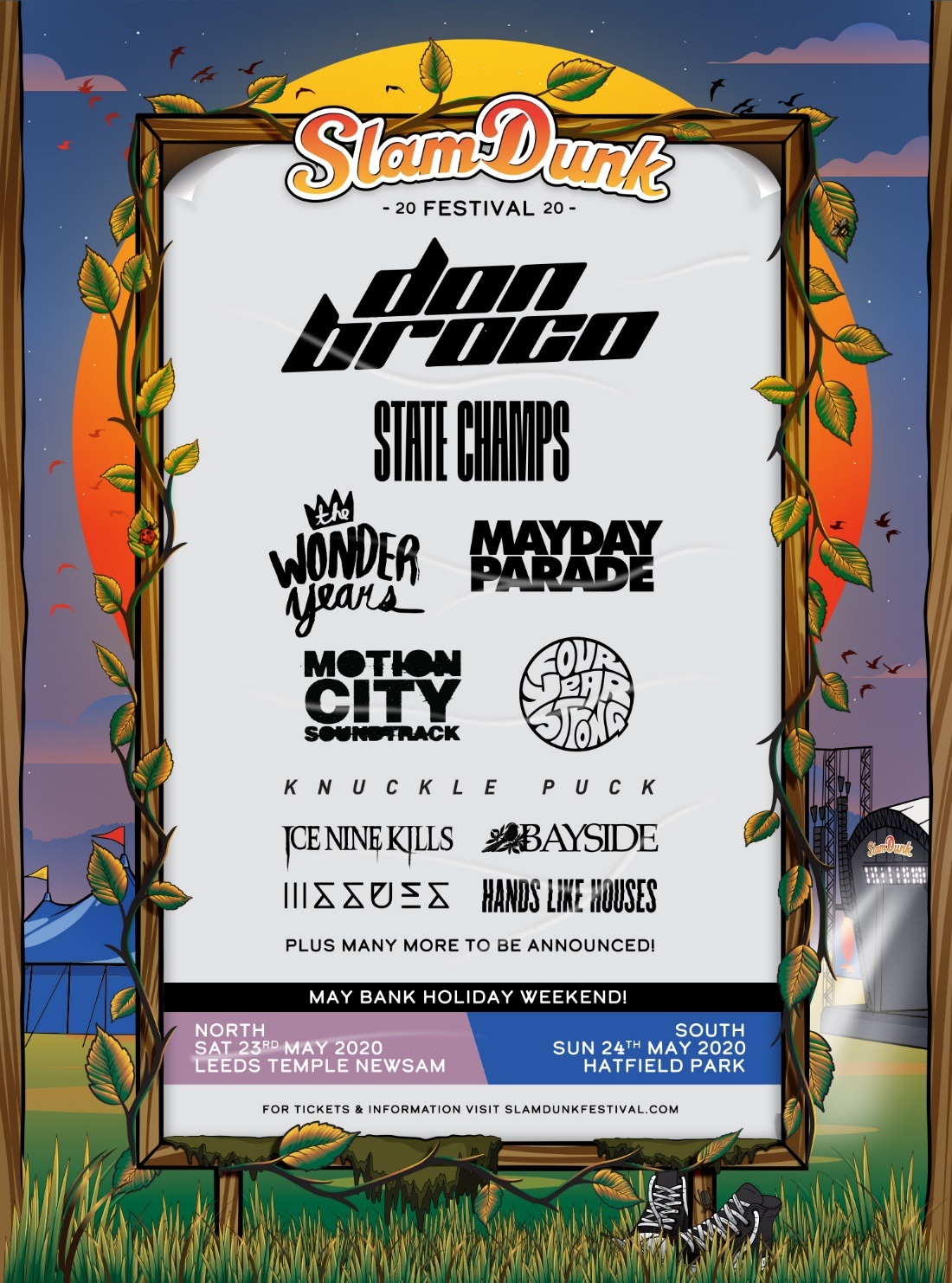