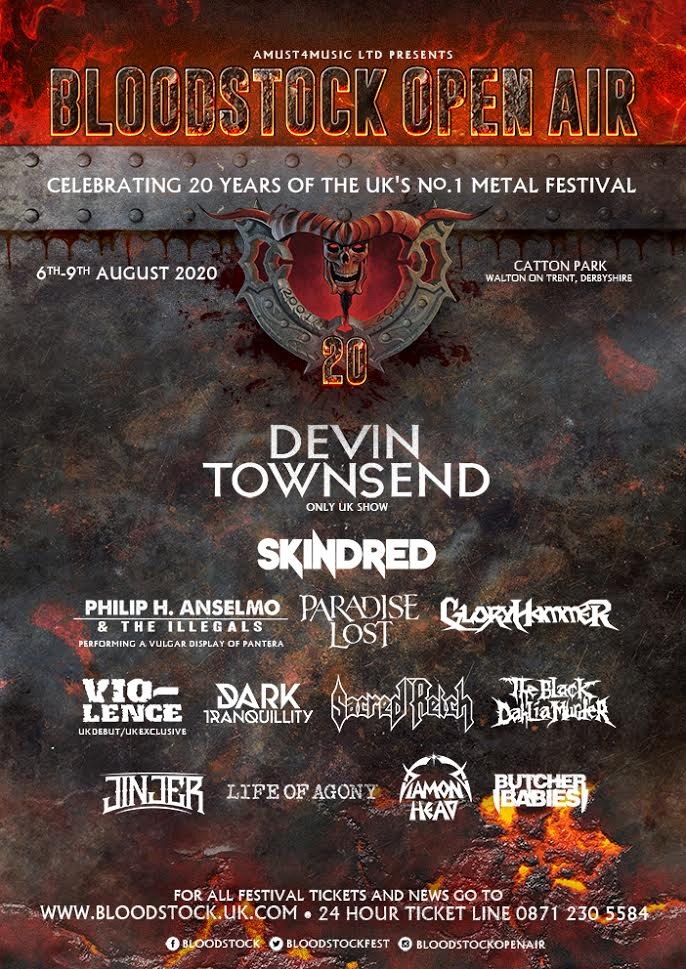 As Halloween approaches and Autumn rolls in, BLOODSTOCK is delighted to reveal four more amazing bands joining the heavy metal shenanigans in Catton Park next August as well as details of this year’s Rock Society memberships.

PHILIP H. ANSELMO & THE ILLEGALS will be bringing their much lauded ‘A Vulgar Display of Pantera’ set to the Ronnie James Dio main stage on Friday. Bound to be one of the ‘Do Not Miss’ sets of the weekend, performing a slew of Pantera classics, we suggest you grab your mates and get down the front early.  For a taste of what’s to come, check out this clip of a similar set earlier this year, in Brooklyn, NY’s famous St Vitus bar - https://youtu.be/Mx2VIEGeWRQ.

On Saturday, PARADISE LOST fans are in for a treat, as the gothic-doom overlords will be performing their much loved fifth album ‘Draconian Times’ in full!  Released in 1995, it spawned singles ‘The Last Time’ (https://youtu.be/uuh-Ui_ZKTk) and ‘Forever Failure’ (https://youtu.be/gVgIW_pBcdI).  Now signed to Nuclear Blast, the band unveiled their fifteenth studio album, ‘Medusa’ in 2017 and hit the studio at the end of October to record the follow up.

BLOODSTOCK is pleased to share that LIFE OF AGONY will be joining us on the Ronnie James Dio main stage on Sunday. New album ‘The Sound Of Scars’, released by Napalm Records just 11 days ago, serves as a sequel to their seminal 1993 debut ‘River Runs Red’. Watch the video for new song ‘Scars’ at https://youtu.be/Z0hyh0yTdaU.

When legends like Metallica and Megadeth cite them as an influence, you know they’ve earned their spot.  DIAMOND HEAD pick up a slot on Sunday’s main stage bill and will show exactly why they’re considered one of the leaders of the New Wave of British Heavy Metal movement. Formed back in 1976, but still creating new music, their latest album ‘The Coffin Train’ dropped in May. Get into the title track at: https://youtu.be/YFsC6M7x32g.

Finally, BLOODSTOCK’s Rock Society memberships go on general sale at 9am on Thursday 31st October.  The Rock Society is effectively BLOODSTOCK’s ‘Members Club’, offering not only a 10% discount on your weekend ticket (on top of the early bird discount when you purchase the 'Rock Society membership + ticket bundle' option), but all sorts of other cool benefits like priority signing tent access, access to the VIP Serpents Lair bar, special tours of the backstage & production areas seeing ‘behind the scenes’, a Rock Society laminate, a dedicated hangout area in the Rock Society tent on site and plenty more besides.  Full details can be found at http://www.bloodstock.uk.com/pages/rock-society.  Memberships are limited to just 300 and sell out almost immediately.  Priced at £75, memberships are available on a ‘first come, first served’ basis, so be ready in the ticket store at 9am on Halloween if you want to join this exclusive club!

BLOODSTOCK will be headlined on Friday by DEVIN TOWNSEND and is also set to welcome SKINDRED, BLACK DAHLIA MURDER, JINJER, VIO-LENCE, SACRED REICH, GLORYHAMMER, DARK TRANQUILITY, and BUTCHER BABIES so far.  BLOODSTOCK’s remaining two headline acts and many more bands performing over the weekend will be announced in due course.

More in this category: « Call of the Wild Festival Announces a Storming Sunday Headliner and Yet More Acts DOWNLOAD FESTIVAL Announces Second Run Of Bands For 2020 »
Login to post comments
back to top