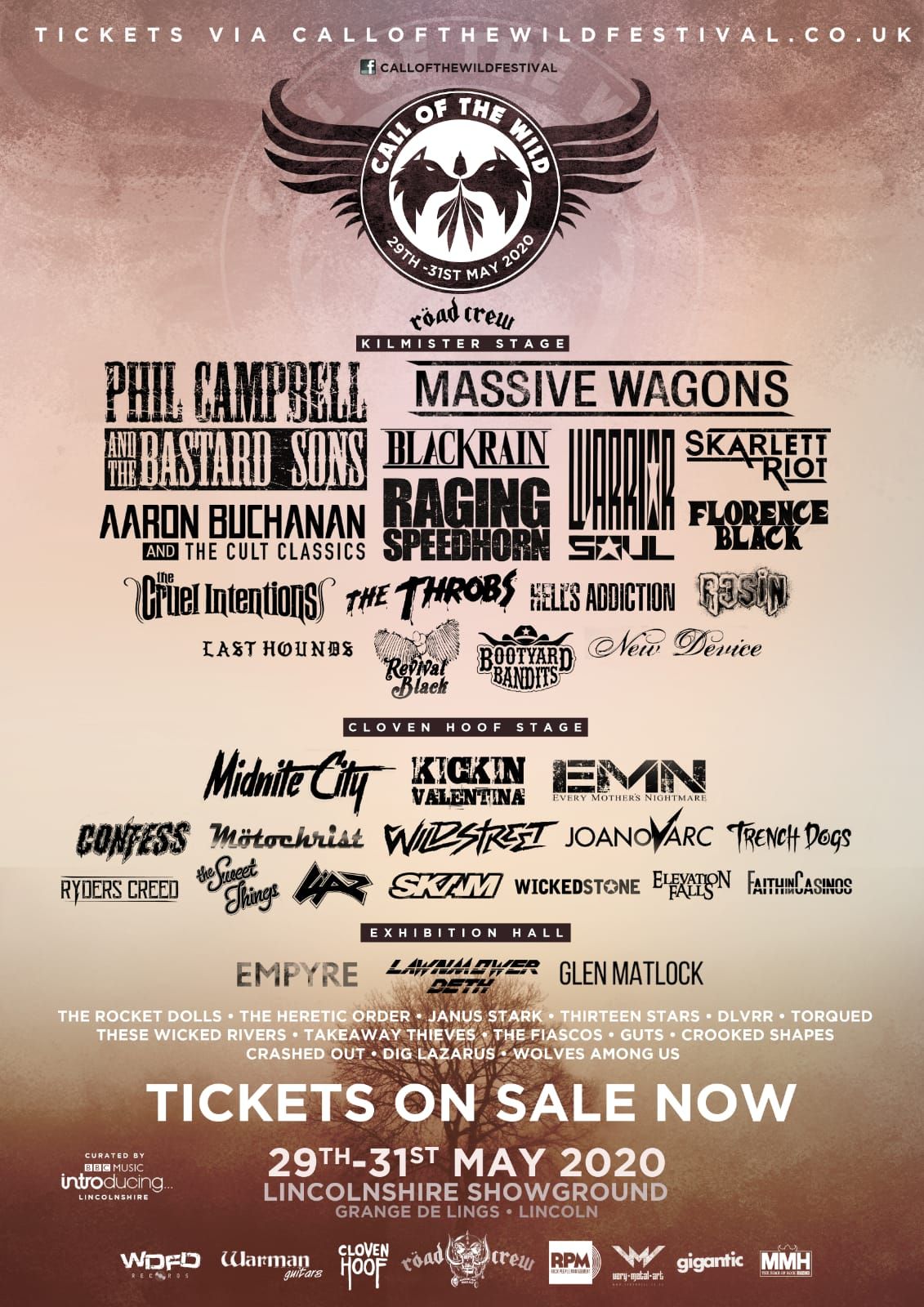 The organisers firmly believe that the festival’s growth and longevity depends on listening to the fans & their plea was for "more metal and heavy bands", so heeding that cry Call of the Wild Festival is proud to confirm Lawnmower Deth, Raging Speedhorn, Wolves Among Us & local band DLVRR, who are curated by BBC Introducing in Lincolnshire.

A huge chunk of New York City sleaze rock has been added to the bill with the punk overtones of Warrior Soul, Wildstreet, Motochrist, The Sweet Things & newly reformed iconic band The Throbs announcing their first UK show in decades.

As if that wasn't enough sleaze rock, the organisers have snapped up Trench Dogs, who have been described as the hybrid child of Hanoi Rocks & Dogs D'Amour.

The Motörhead motif continues as The Kilmister Stage will proudly be sponsored by Road Crew. Road Crew is a beer that resulted from special collaboration between Cameron’s Brewery and Motörhead. Road Crew takes its name from the Motörhead fan favourite ‘(We Are) The Road Crew’ on the classic ‘Ace of Spades’ album. The song was penned as a tribute to the band’s dedicated team of roadies. Band members Mikkey Dee & Phil Campbell played key parts in the development of the beer.

The classic rock vibe has been fleshed out with popular additions in the form of New Device, Wicked Stone, JOANovARC, Thirteen Stars, These Wicked Rivers, Crooked Shapes & Elevation Falls.

COTW are also proud to confirm Glen Matlock & the Tough Cookies. Glen is best known for being the bass guitarist in the original line-up of the Sex Pistols. He is credited as a co-author on 10 of the 12 songs on Never Mind the Bollocks and Here’s the Sex Pistols, although he had left the band while the album was being recorded. He later joined the Sex Pistols reformation to tour 2002 - 03 & 2007 - 08. In the band we have Earl Slick lead guitar hero who played with David Bowie and John Lennon. Jim Lowe Grammy winning producer with the Stereophonics And Chris Musto who played with Dirt, Kim Wilde and the legend Johnny Thunders.

Other acts confirmed include Dig Lazarus; also Guts & Faith in Casinos - both curated by BBC Introducing in Lincolnshire.

With the festival already outselling last year's numbers, it’s expected to bring in large numbers from across the UK and Europe. Tickets already sold to both USA & Canada confirm that the word has spread internationally.

Call of the Wild’s second cycle takes place between 29th-31st May 2020 at the Lincolnshire Showground, Grange-de-Lings, Lincoln LN2 2NA.