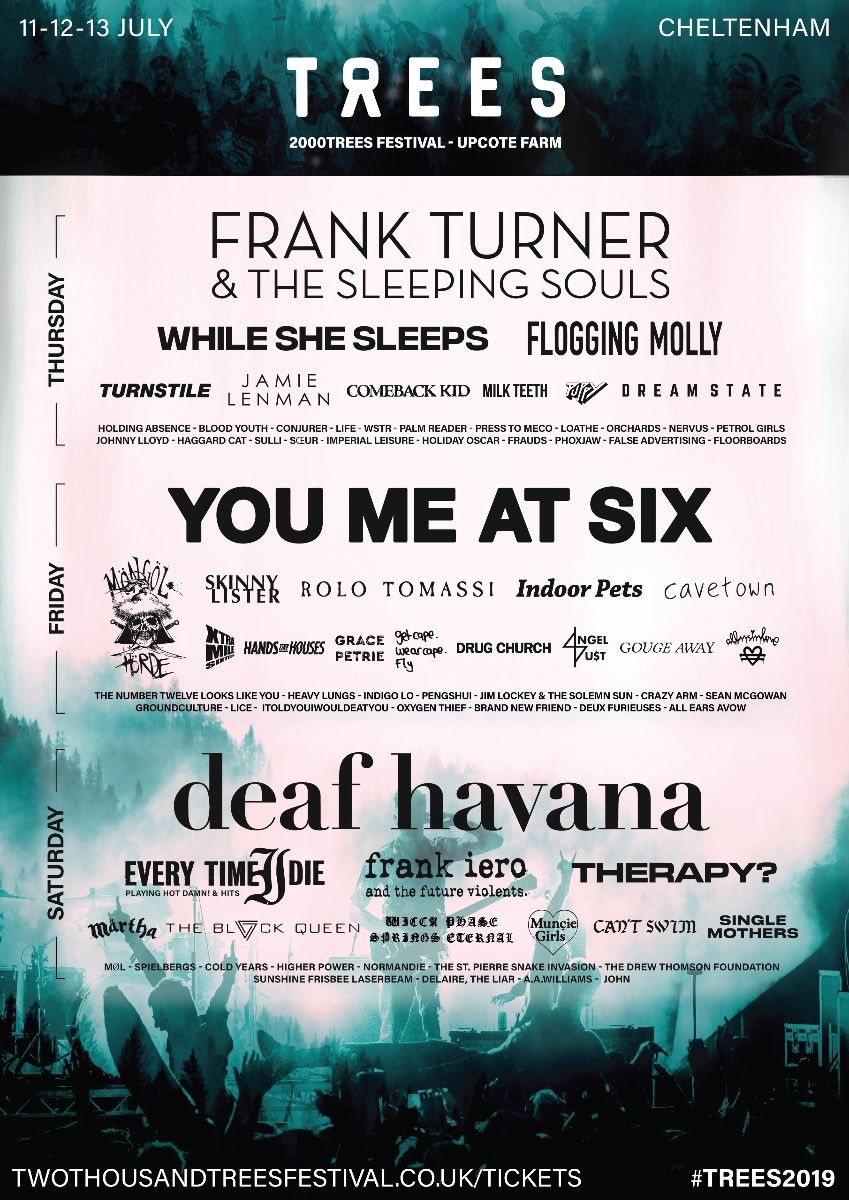 Happening on Thursday 11th July/ Friday 12th July/ Saturday 13th July, tickets for the event
are on sale now and can be purchased from - HERE

The event will be taking place on Thursday 11th July, Friday 12th July and Saturday 13th July, at Upcote Farm near Cheltenham in Gloucestershire

From Deaf Havana drummer, Tom Ogden - "Personally I’m so excited to headline 2000trees Festival. Last time Deaf Havana headlined my daughter was born, so I didn’t make it! It’s the only show I’ve ever missed, so I’m so thankful that we’ve been asked back!"

Joining Deaf Havana on the festival line up this year are a selection of incredible bands and artistsmaking their 2000trees debuts. These include the Irish-American seven-piece Celtic punk band Flogging Molly, the brilliant US alternative punks Can't Swim from New York City, the synth-pop electro 3 piece The Black Queen feat Greg Puciato (Dillinger Escape Plan) and Gothboiclique founder and emo tinged US rapper Wicca Phase Springs Eternal. On top of these, also announced today are one of the most exciting bands in the world right now
Drug Church, the insanely cool and catchy US hardcore band ANGEL DU$T, recently reformed underground legends from New Jersey USA The Number 12 Looks Like You, brand new alternative folk solo artist from London A.A. Williams and many more!

From ANGEL DU$T - "2000trees is going to be phat. I wanna hook up with the hot dude in Higher Power and stage dive to Muncie Girls."

ALSO playing include the likes of Turnstile, Flogging Molly, Get Cape. Wear Cape. Fly. Normanide, Cold Years AND a huge selection of some of our finest UK rock and heavy bands around at this time, including Dream State, Blood Youth, Palm Reader, Holding Absence, Conjurer, Press To MECO, Allusinlove, Haggard Cat and Sœur

Previously announced for the event include the other two main stage headliners Frank Turner (Thursday) and You Me At Six (Friday. The incredible Every Time I Die, who will be performing 'Hot Damn' in full (plus more) as headliners on The Cave stage on Saturday and Sheffield's While She Sleeps (Cave Stage headliners on Thursday), returning festival hero Jamie Lenman (who will be curating, opening and closing his very own stage and mini festival, Lenmania 2, on the Axiom Stage on the Thursday - being the first act to be performing at this years event, on the Thursday early afternoon), the hugely anticipated first timer Frank Iero with his band Frank Iero And The Future Violents (headlining the Axiom Stage on the Saturday) and many more.