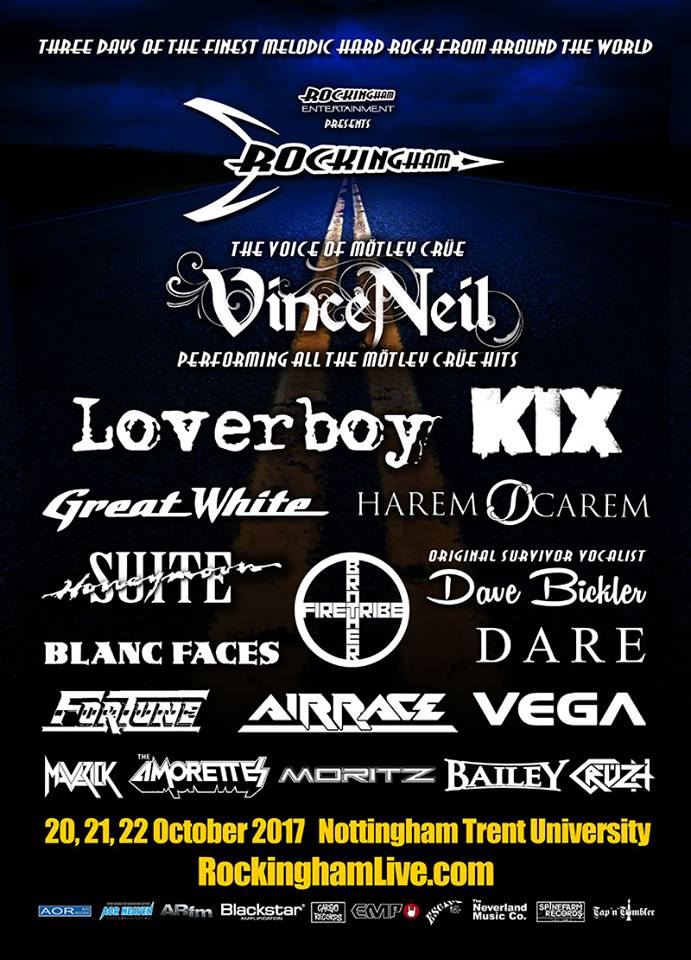 Announced last night exclusively on The Steve Price Rock Show on ARFM, the official line up of Rockingham 2017.
This is set to be one of the biggest ever melodic rock festivals that Nottingham as ever seen.
Bringing an absolute megastar to the Rockingham festival and a host of AOR and hard rock legends, the likes that no one has ever seen under one roof, over one weekend. Simply amazing.......

Vince Neil
That’s right, the legendary front man of Motley Crue is playing Rockingham 2017 and it’s gonna be killer! Playing a set of Motley Crue greatest hits, this is absolutely a must for fans of ‘the crue!!
The original bad boy of Rock n Roll is coming back to the UK and he’s gonna blow the roof off!! You do not want to miss it!

Loverboy
This has been a long time coming, after how many years away? and on everybody’s bucket list. Yes, they're coming in October!! It’s Loverboy. The Canadian rockers will be Let's all work for that weekend.

Kix
Another one of those pinch me moments and again on so many peoples bucket list, the boys of KIX are coming back to the UK, bringing the good old rock n roll back to Rockingham .

Great White
After 30+ years, they’re back. The boys from Great White are bring they’re inimitable show to Rockingham....and with over 10 million album sales, they got something to say and we can’t wait! Once Bitten............

Brother Firetribe
Making a welcome return to the UK after their amazing performance nearly 4 years ago, it’s Brother Firetribe “Evoking mental imagery of bathing in the sun on a Venice Beach walkway.......... Brother Firetribe's smooth hard rock has that huge American AOR sound that no one in Finland has ever even ventured to attempt. “ Do not miss their set!

Blanc Faces
For the first time ever in the UK, Robbie and Brian will be performing a Blanc Faces set and Rockingham ! From the start you know you will be listening to something special. Classic melodic rock!

Dare
Dare are on a roll. On the back of their resurgence and continuing success everyone is very excited that the mighty DARE will be playing Rockingham in 2017.

Cruzh
Hailing from Sweden Cruzh are set to bring their hook laden melodies to the Rockingham stage. Clearly continuing the Scandinavian takeover of fine AOR!

Maverick
A mighty fine 'up and coming band' that definitely deserve their place at Rockingham. True Irish rockers that are destined for greatness. Checkout ‘Big Red’

Harem Scarem
Making a welcome return to UK shores it’s Harem Scarem at Rockingham 2017. With an extensive back catalogue of class, including the sensational ‘Mood Swings’ released in 93’. Harry Hess and the boys are sure to guarantee a set you will never forget.

Vega
Vega go from strength to strength following on from tours with FM, Magnum, and about to embark on a tour The Dan Reed Network, the VEGA boys will be returning to the Rockingham stage having played the first. Always a crowd pleaser with their energetic performance combined with exceptional songs. A winner every day of the week. ‘The crowd goes wild.......!’

Dave Bickler
The original voice of Survivor DAVE BICKLER!
Singing on probably the most well known AOR track ever ‘The Eye of The Tiger’ the legendary vocalist Dave Bickler will be gracing the stage at Rockingham. An opportunity to see some great Survivor classics!

Fortune
After last years amazing performance at Rockingham 2016, making a return to the Trent University Nottingham, Fortune will once again, fill the venue with AOR.

Moritz
Celebrating over 30 years since they originally formed, Moritz will be playing Rockingham and are sure to deliver a set of classic 80’s AOR ....

Honeymoon Suite
The Canadian invasion continues with HONEYMOON SUITE!
Over 8 years since they last played the UK and no doubt will provide the Rockingham crowd with a set of pure Hard Rock & AOR gems.

Airrace
Classic rock band Airrace will be joining the Rockingham weekend providing a taste of British hard rock. No doubt delivering some great tracks from the 1984 debut Shaft Of Light’ and more.

The Amorettes
Having recently toured with Aussie rockers Airbourne as well as a whole host of rock supremos’, the scottish rock 3 piece will be bringing their no nonsense punchy rock to Rockingham!

Bailey
Having performed with a number of bands on the Rockingham stage in the last few years, Nigel Bailey will be playing a set of his own great songs and further cementing why this british talent is in demand all over the world.

So there you go, another amazing line-up for Rockingham. Pulling in some of the biggest hard rock stars on the planet.
It just keeps getting better year on year.

For more details and ticket information check out www.rockinghamlive.com

More in this category: « Summer In The City - The Scene in Swansea - 16th & 17th June 2017 SLAM DUNK FESTIVAL 2017 ANNOUNCES DEAF HAVANA, FRANK IERO AND THE PATIENCE, WE ARE THE OCEAN & MORE »
Login to post comments
back to top