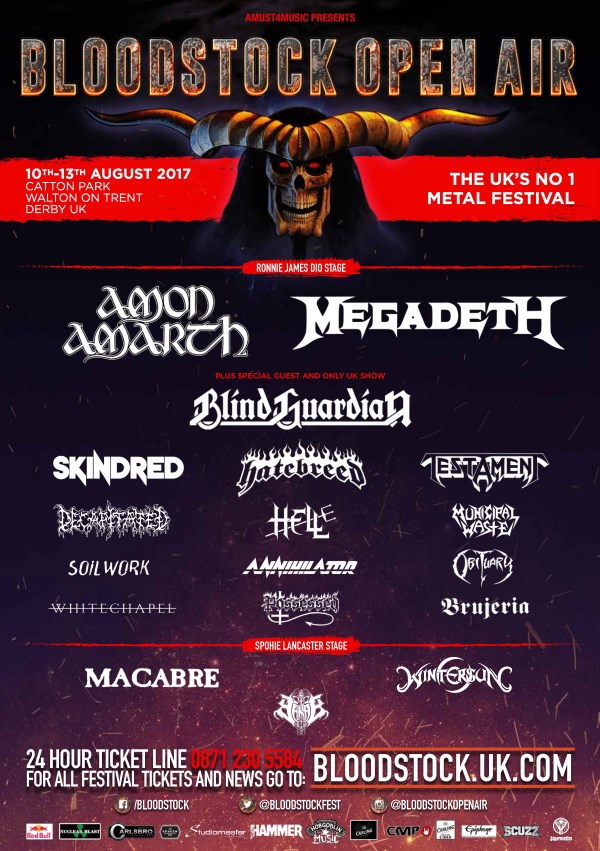 As 2017 settles in, four more brutal bands are locked in for August’s best metal weekender; BLOODSTOCK!

Swedish metal marauders, SOILWORK are confirmed for a main stage slot at Catton Park.  Frontman Björn ‘Speed’ Strid tells us "We are really thrilled to return to UK soil after a killer mini-tour with Arch Enemy last year.  That ended with one of the most spectacular and sweatiest shows to date at The Underworld in London. BLOODSTOCK is always a riot and we cannot wait to hit the stage this summer.  Bring it England!!!"

‘Murder metal’ outfit, MACABRE are set for a headline slot on the Sophie Lancaster stage.  The Chicago-based band blend elements of true crime, math rock, punk, thrash, folk melodies, death metal, jazz fusion, black metal and more.  Guitarist/vocalist, Corporate Death tells us “We haven’t been back to the UK in several years but BLOODSTOCK is exactly where MACABRE should play if you know our music.”  Don’t miss this rare opportunity to catch this unique band on UK shores!

Metallic Finns WINTERSUN are also lined up to headline the Sophie Lancaster stage.  The band are hard at work on new album, ‘The Forest Seasons’ which is set for release this Summer via Nuclear Blast.  The band tell us “It’ll be great to come back to the atmospheric BLOODSTOCK.  We had a blast in 2011, but this year is extra special since we’re going to play new music for you guys!  See ya in August!"

Keen to include bands from less obvious parts of the world too, BLOODSTOCK is delighted to welcome back Egyptian death metallers, SCARAB, to the Sophie stage.  The band are currently recording their new album, ‘Martyrs Of The Storm’ so expect some new material at Catton Park this August!

Also available now is the very popular ticket deposit plan.  The payment scheme helps ease the pain of paying for your standard weekend ticket by breaking it up into five smaller, more manageable sums.  Sign up in the ticket store before 28th Feb with an initial payment of £34.80.  Thereafter, four additional instalments of £27.80 will debit your bank account on 1st April, May, June and July respectively.

Get full info over at http://bloodstock.seetickets.com/content/ticket-options.

BLOODSTOCK will take place at Catton Park, Derbyshire on 10th-13th August 2017.  Standard weekend camping tix are on sale at £139 (plus booking fee), plus limited VIP packages/upgrades and car parking tickets (at a cheaper price than ‘on the day’ purchase) from http://bloodstock.seetickets.com/content/ticket-options.  Children’s weekend tickets are also available, priced £35 (+ booking fee) and under 4’s go free!  Camper van pitches have now SOLD OUT.

More in this category: « HELLYEAH are coming to the UK! Win signed copies 'UNDEN!ABLE' cd Win A signed Copy of the latest HELLYEAH release 'UNDEN!ABLE' »
Login to post comments
back to top